By the end of this tutorial, you should be able to:

What is Data Conversion?​

Data conversion is changing one format of receiving/storing data into another format. These formats are usually in decimal numbers, binary numbers, and or hexadecimal numbers.

Data conversion is used for reasons that not all specific files and formats can access and read all data types. As a solution data can be converted into different formats to allow a wider range of softwares to enter and use the data. This idea permits great flexibility and grants the user to use data as you’d like.

Understand What Binary is?​

Binary numbers are numbers that are expressed in the digits ‘1’ and ‘0’. The number of 1’s and 0’s represent an increase to the original base 20. Looking at the chart below the base of each binary position increases by a power of 1 from the previous, and all with a base of 2. The word binary means two which indicates why the base of each binary number is 2. Each binary position can only be used once or never, hence the reasoning behind ‘1’ and ‘0’. ‘1’ meaning the number is used and ‘0’ meaning the number is not used.

**NOTE:** The binary bases continue past 27. You can continue increasing the power to be able to hold a larger decimal value!

**NOTE** Can only be represented by a one or zero meaning a number can only be used once. You can add the corresponding decimal values together to receive the total decimal number.

Understand What Hexadecimal is?​

**NOTE** Each number or letter represents a decimal number. You can use each digit multiple times and you are to use add their corresponding decimal values to get the total decimal number.

Therefore the Hexadecimal equivilant of 7562 is 1D8A.

In this example we will explore how different values in hexadecimal can display various colours on an RGB LED!! 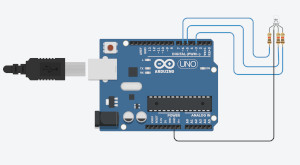 In the code we will need to initialize a pin for each leg of the LED. Now to be able to change and see the different colour you can make, edit the values in analogWrite(red,0x79); , analogWrite(green,0x2A); , and analogWrite(blue,0xDB); . Keep the 0x as that indicates that the input is in hexadecimal. The limitations range from 00 to FF, so you have quite the range to explore with different values.

Free spirit!! Try messing around with the program above and see how many cool colours you can create using Hexadecimal numbers.